It’s 9.30pm at night, it’s pitch black and cold. I’m on a night bus going from Tucuman to Mendoza in Argentina. I’ve already been on the bus for five hours. Everybody around me is sleeping, or trying to sleep. I can hear a couple of snores coming from somewhere so there’s definitely one successful passenger. I’m really jealous of the snoring passenger, I wish I could fall asleep.

The roads in Argentina are all tarmacked so it’s a comfortable ride (much smoother than the Bolivian bus rides). I should fall asleep but I can never quite manage it. I’m sat with my head torch on reading another gruesome murder mystery, the best kind of book in my opinion. Although probably not the best book for an eerily quiet night bus journey.

All of a sudden the bus stops and the painfully bright fluorescent lights come on. Hmm, why have they put the lights on and stopped in the middle of nowhere? People start to stir, slowly passengers wake up and put their seats into the upright position. Why are they bothering to wake up, this isn’t a stop is it? Tom’s still snoozing beside me. His seat is nearly flat, pretty much on his neighbours lap, he doesn’t stir. I can hear the bus door open downstairs, I’m sat on the upper deck at the back. Out of nowhere a huge man in an army uniform appears at the front of the bus. Ooh, it’s just an I.D. check. On every bus I’ve taken in Argentina so far, the bus has always been stopped and every passenger has to show I.D. I don’t wake Tom as it’ll take a while for the army guy to reach us at the back of the bus. I go back to reading my book. There’s nothing to worry about, I’ll just flash my passport and they’ll be happy.

Ten minutes or so pass and I notice the army guy keeps shouting something in Spanish, all the other passengers keep looking around the bus. I can’t work out what he’s saying as I’m too far away, plus I don’t speak Spanish. Tom’s awake now and we watch as the army guy comes towards us. Hmm, he’s not actually coming towards us is he? Erm, yes he is. In stupidly fast Spanish he says something to me and Tom whilst waving a piece of paper in our faces. I have no idea what’s going on. I just really want the bus to get going, we’ve got another ten hours to go and some sleeping to do.

The army guy keeps jabbering on. Tom picks up the word for bag or suitcase “maleta”. Uhoh. I show the army guy my luggage ticket (yes a luggage ticket, pretty fancy for a South American bus). His eyes tell me that for the last twenty minutes he’s been looking for the two passengers whose bags belong to that luggage ticket number. He asks us to get off the bus. What?? It’s cold and dark AND I don’t know where we are plus it’s about 10pm. I can feel everybody’s eyes on us thinking oh surprise surprise it’s the stupid foreigners. Those fools have not been listening and they’re going to hold up the bus even longer.

We follow the army guy off the bus into the cold outside air. He takes us to the luggage compartment where another army guy is currently sitting on our rucksacks. The army guy asks for our passports. Oops they’re upstairs. He gives us an angry look and tells us to go and get them. Well that was a mistake, they’re already angry and we’ve made them angrier by not coming off the bus with our passports. So, back upstairs we go, along the aisle as everyone follows us with their eyes. They definitely think we’re suspicious now.

When we get off the bus this time we have to go into a little building, where two army guys are stood with our rucksacks. I’m starting to panic. Is the bus going to drive away? One army guy, I’m presuming the boss, reels off a load of Spanish incredibly quickly. It’s so annoying, we speak enough Spanish to get by and in a situation like this it would be nicer if they spoke a little slower, but they never do.

We show them our passports, tell them when we arrived in Argentina and where we came from. We explain that we are tourists travelling for pleasure. We let them know when we are leaving Argentina. We do this is the most basic broken Spanish possible. I’m not too worried as we’ve got nothing to hide and we’ve not done anything wrong, it’s just frustrating we can’t speak to them fluently. They’re still not happy and they decide to search our rucksacks, each and every pocket of our rucksacks.

I’ve always thought I really hope I never have to empty my rucksack for anybody because I have so many bags within my bag it would take forever. I get assigned one army guy and Tom gets assigned another.  I take off the four locks I have on each of my rucksack pockets and the army guy delves in. He pulls out EVERYTHING. Argh. Within my rucksack I have four separate storage bags, he empties each bag of all my belongings. Boohoo. He’s happy that my clothes are not suspicious (I’m really glad he didn’t spot the secret place I keep my worn underwear!). Now he moves on to my rucksack’s side pockets. He pulls out EVERYTHING again. As the minutes pass I keep thinking that the people on the night bus are really going to hate me and Tom. Shampoo, conditioner, soap, a razor, mini hair straighteners, insect repellent….He seems confused by a few of these things, I can’t translate them into Spanish so the best I can manage is, body things. 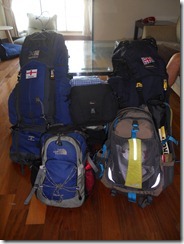 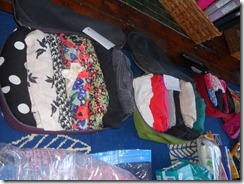 It’s all going fine until he spots some large, bright pink tablets. I’d completely forgotten they were in my bag. They’re antibiotics my mum made me pack, as mum’s do. I don’t even really know what they’re for. He takes them, looks at them, asks me what they are and where they came from. Oh gaad, I try and ramble off something about head aches thinking that I might get arrested for something my mum made me pack, haha. Tom shouts over in Spanish that they are for headaches. He’s happy with that.

Finally onto my last rucksack compartment. He examines my shoes, bags, towel and Manchester United sleep sheet. I thought we might have bonded over the subject of football once he pulled out my Manchester United sleep sheet. All the Argentinians I’ve met so far have wanted to talk about football (after they’ve repeated the name Maradona a few times). However not this army guy, nope, he’s not in the mood. He orders me to repack my rucksack. Thanks a lot Mr Army Man, you unpack it all over the floor and then you don’t even offer to repack it. My once neatly packed rucksack, full of nicely rolled clothes is now in an untidy mess all over the floor.

My Manchester United sleep sheet, perfect for when you don’t want to sleep on a dodgy hostel sheet. Ryan Giggs used to have so much hair didn’t he?!

I can’t really believe what’s happening. It’s the middle of the night, I’m in the middle of nowhere alongside an Argentinian road. A bus full of grumpy people wanting to continue their journey is waiting for us and now Tom is juggling in front of two army guys. He’s juggling to prove that he doesn’t have anything suspicious buried in the middle of his juggling balls.

What a weird experience.

We get back on the bus to icy glares from the bored passengers desperate to get on their way.

Tom juggling in Trujillo, Peru. He bought the juggling balls to help pass the time until a night bus journey was due to start.

Me, my driver and my bus company in Argentina, Flecha Bus.

During seven months of travelling South America we’ve taken seven night buses so far. (This is going to increase quite a bit in the next month as we will be going right down to the bottom of Argentina and then all the way back up to the very top, to Iguazu).

The longest night bus journey we’ve done was from Mendoza in Argentina to Bariloche in Argentina. This journey took twenty-two and a half hours!!!!!!!! So really it was a night and day bus!

The best night bus journey was from Ica in Peru to Cusco in Peru. This journey was eighteen hours long. It was the best because we bought the VIP ticket. In Peru the VIP bus tickets are still quite cheap so really worth it for a long journey (I’d really recommend the Cruz Del Sur bus company). This meant we got a large, fully reclining seat with a blanket and a pillow. We also got dinner, breakfast and drinks served by the bus steward. There was also a film shown in English, which never happens.

The dirtiest, most chaotic and sleepless night bus journey was from Samaipata in Bolivia to Sucre in Bolivia. This journey about ten hours long.We got on the bus after it had been travelling for two hours already so it was full. They didn’t put the bus lights on so we had to search for our seats in the dark. There were two grumpy Bolivians sat in our seats and they wouldn’t move. After a while of arguing they eventually moved. The whole journey was on a unsealed, bumpy mountain road with your standard Bolivian sheer cliff edges right next to the bus.

The shortest night bus journey was from Trujillo in Peru to Huaraz in Peru. This was only eight hours long. This journey was annoying because it could easily have happened during the day but in Peru the bus times are crazy and often buses will only run during the night regardless of how short the journey is.

Seven night bus journeys in seven months doesn’t sound that bad. But when you work out that’s over 100 hours of travel, it can seem pretty painful. However with the worst countries behind us for bus travel, taking a night bus in Argentina is really not that bad. I remember when I was sixteen and I travelled from Manchester to Cornwall on a bus with my friends. I thought ten hours on a bus was the worst thing ever. I’ve now learnt that ten hours on a bus is a doddle and I will never moan about such a short amount of bus time ever again. I’ll happily go to Cornwall and back in a day anytime! Haha…

Read my last blog post, Going Cooking Crazy. It’s all about cooking whilst travelling South America. The delicious Argentinian cuisine gets a mention too.

Check out an older blog Yoga Yawn. It’s all about how yoga helps you go to sleep. Great for the constantly moving traveller!

Or have a look at where did all the change go? It talks about how difficult it is to get change in South America and some of the comical things that happen along the way.

If you want to find out where I’ve been so far in South America, as I only have 33 days remaining, take a look at my route on this South America map My Travels…South America created by WildYellowBelly Photography.