Taiwan isn’t really on the Westerner’s to do list. When I told my friends and family I was going to live and work in Taiwan their response would often be, “Oh that’s so cool you’re going to live in THAILAND??!!!’’ Erm, no. Or they would say, “Right, that’s the place with all the factories that make everything isn’t it?”. Well that used to be the case but I don’t think Taiwan makes as many random products as they used to but it’s certainly the land of electronics (home to Acer and Asus plus many others). Anyway my point is no-one really knows how beautiful Taiwan is because they think of factories or they don’t even know what to think. So, I want to show you some of the incredible mountains, beaches, waterfalls, temples, cities, coastlines, islands etc. etc. which Taiwan has to offer so you can add it to your bucket list NOW!

Taroko Gorge is Taiwan’s premier tourist sight and it is well deserved. Throughout my time in Taiwan I visited it a lot and every time it was a little bit different due to the damaging effects of Taiwan’s regular typhoons. It is absolutely amazing to motorbike through as it’s the start of the Central Cross Highway which is the highest road in East Asia. There are tons of hikes to do in and around the gorge. One of my favourites was the hike which you take from the Eternal Spring Shrine. It goes up the mountain and takes you to two temples hidden in the hills (the picture on the top right is a temple on this hike). However this hike is not always open because landslides tend to damage the trail. 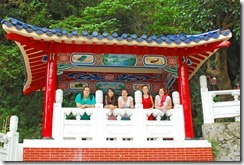 Green Island lies off Taiwan’s south-east coast and it is a must see. However be warned the boat ride to the island is rough, rough, rough! Well it is most of the time. I visited Green Island in January 2009 and the boat was like a roller coaster. The crew handed out sick bags to everyone and seriously everyone was sick (including me bleh). It was one of the most disgusting boat rides I’ve ever been on. It was certainly worth it though, Green Island is definitely green and definitely gorgeous. When I was wandering around the sparse landscape it felt like I was either in an episode of Lost (without the spooky goings on) or in one of the Jurassic Park films (without the dinosaurs). The surrounding sea is a lovely turquoise so great for diving and snorkelling. Plus there is a mini Great Wall of China which is pretty funny.

You might be a little bit puzzled wondering why a highway is making it onto a list of beautiful places in Taiwan but it’s not a mistake. This is my all time favourite Taiwan sight. It’s a really high, long and windy mountainous road that bisects Taiwan from the west (Tainan) all the way to the east coast (Taitung). It passes through the Central Mountain Range. Along the way there are glorious mountain landscapes, a few colourful mountain top temples, a sea of clouds (the best part) as well as natural hot springs. I’ve travelled a long it a few times and every time it’s completely different depending on how badly the typhoon season has damaged it.

The first time I travelled along the Southern Cross Highway was on a weekend trip with my boyfriend’s parents by car. The road was not damaged at all, it was fully sealed and it was a really fun trip with glorious weather. We ended up staying in a hot spring hotel at the eastern end of the road after the long drive.

The second time I travelled across the highway was in a Space Gear van which my friends and I hired for the Chinese New Year holiday of 2009. This was such a fab road trip and everyone was amazed at how beautiful the scenery was plus we managed to make it down to the INCREDIBLE Lisong natural hot springs. The was quite a trek, with some rock climbing and ice water thrown it, but what a memory (which I am going to write a separate blog about because getting to the springs was MAJOR). We stayed at a completely random hostel (if you could call it that there were no beds) on the eastern side of the highway.

The last time I travelled across the highway was after typhoon Morakot had badly damaged the road and southern Taiwan. I’d tried a few times with my own parents and my boyfriend’s sister on separate trips to get across the highway after the typhoon but it was not possible, the road was too damaged. However on motorbikes in April 2010 my boyfriend and I with some adventurous motor biking friends took a Tomb Sweeping holiday across the highway. It was really damaged and there was barely any road left after the Daguanshan Tunnel (615m-long Daguanshan Tunnel at Yakou which takes you to the highest point of the highway). It was all loose gravel with no barriers but we managed it (a car wouldn’t have). It was so strange to see the sea of clouds without all the pretty wooden walk ways and coffee vans, typhoon Morakot had sent them over the edge.

I really hope the road gets fixed because it is truly a glorious place to travel.

Seeing the sunrise over the Alishan national scenic area is incredible (and tiring!). It’s quite a walk up to the viewing platform from the nearby hotels. It’s bizarre because you wake up when it’s still dark and absolutely freezing, you dress as quickly as you can because you don’t want to miss the sunrise. As you walk uphill along the trail quite a few people slowly join you as it’s a really popular sight. When the sun first peaks out the waiting crowds cheer and clap, it’s a really cool experience. The cherry blossoms are beautiful too Alishan is full of them. Also don’t miss the highest 7/11 in Taiwan which is also in Alishan…..a must see (haha)! 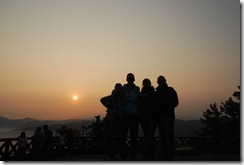 Penghu….complete tropical bliss. Penghu is an archipelago of sixty-four islands off Taiwan’s western coast. I flew to and stayed on Makung, the main island. Makung has some pretty beaches and your usual temples and fruit juice bars. However the most beautiful island I visited in Penghu was the island of Jhiben. Jhiben is gorgeous because it has a huge fish tail which is just an endless piece of white sand surrounded by crystal clear water. It was great visiting Penghu because the beaches were empty. When I was on Jhiben’s fish tail with my friends it felt like we’d hired our own private island…perfection.

Another highway! This time it’s the highest road in east Asia, the Central Cross Highway. This is a fabulous road which winds from the marble walls of Taroko Gorge on the east coast to Donghih in the west. It is such fun to drive on a motorbike but be warned I went in November 2010 and it was still absolutely freezing because it’s at such a high altitude. When Charlie Boorman drove on the stretch through Taroko Gorge for his T.V. programme By Any Means he said it was one of the best roads he’d ever motorbiked. There is a huge plaque and viewing point at the peak (3275km) which everyone stops to have their photos in front of.

Juifen is a pretty, small town in north-eastern Taiwan. It used to be a gold mining town but it’s now more famous for tea as there is lots of high altitude tea grown nearby. Juifen’s Old Street is really narrow and really cute. It winds you past shops selling tea, souvenirs and an assortment of sweet food and snacks. I took my parents there when they visited Taiwan and we had a great day wandering around and being taught how to make the perfect pot of tea in Juifen’s oldest tea shop. 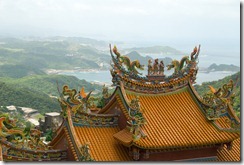 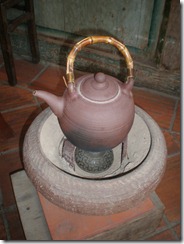 Now seriously I could go on listing places forever. I have so many pictures and places of interest to mention because I really did try and see most of the island with the help of my friends and trusty motorbike. So I’ll leave you with a few little snaps of some extra must see spots! 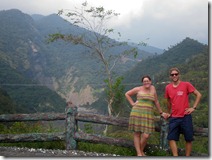 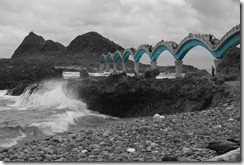 Check out these links if you want more information about places to visit in Taiwan: